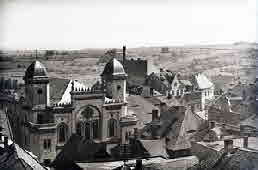 „So what had they done, the small Jews, the honest traders, those peaceful citizens from Prague?In Prague they were said to be not Czechs, and in Saaz and Eger, to be not Germans.“ Theodor Herzll

It is supported by the Czech-German Fund for the Future, Adalbert Stifter association e. V., goverment adviser of the Federal Republic of Germany for culture and media. In addition also by the Association natives and friends of the town of Saaz, Jewish Community in Teplice and by the German Embassy in the Czech Republic.